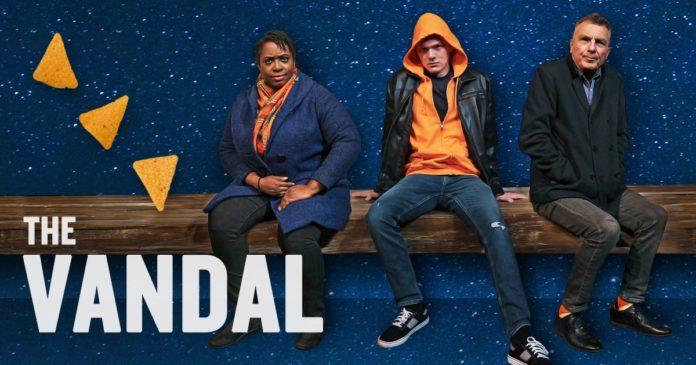 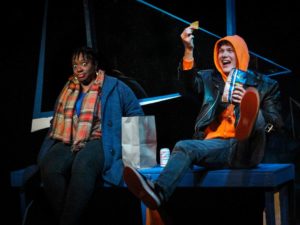 The Vandal is in production at All Beaches Experimental Theatre through Nov. 3. The dark comedy is one of ABET’s finest shows and an enjoyable evening of impactful, energetic theater.

ABET’s intriguing production is skillfully directed by Caryl Butterley and little was shared about the show prior to opening. Some say the less you know about The Vandal going in, the more you will enjoy the story’s twists and turns as it unfolds.

The story is set on a cold night in New York, and is presented in one act without intermission. Written by Hamish Linklater, the play presents a series of one-on-one encounters between a distraught woman and two very different men – an overenthusiastic teenage boy and a crusty man. 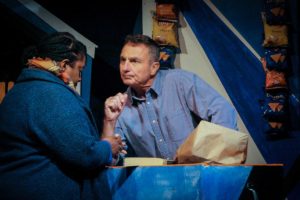 Butterley’s expert direction allows the story to unfold swiftly and the cast features three exceptional actors who deliver outstanding performances as the story’s lost souls. Cher Davis is onstage the entire show and delivers a brilliantly nuanced rendering of the Woman. Austin Kelley’s mesmerizing portrayal of the Boy is highlighted by his rapid-fire dialogue and explosive energy. Kevin Bodge completes the cast with a memorable performance as the Man, a complicated and sarcastic liquor store owner who reveals his own vulnerability.

Meganne McCawley Johnson and Gordon Frank designed a beautiful set that adds an eerie ambiance, which is complemented by Bryan Frank’s lighting design. Laurel Wilson is the stage manager (and beer wrangler), Butterley provided the sound design and Andrew McCraney is the light/sound operator.

ABET is located at 544 Atlantic Blvd. in Neptune Beach.