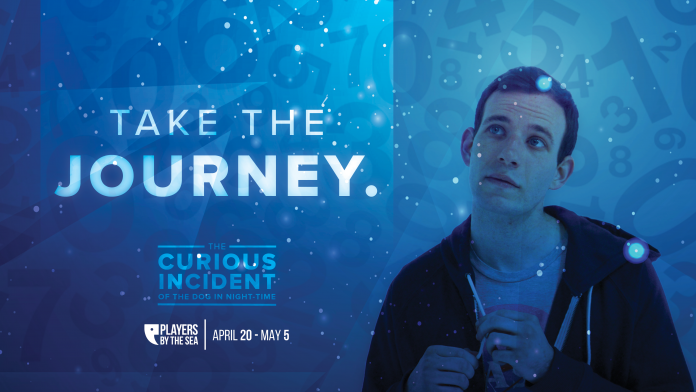 Players is presenting the Northeast Florida premiere of this play, adapted by Simon Stephens from a best-selling novel by Mark Haddon of the same name. Players’ production is directed by Bradley Akers.

“I read the novel and I fell in love with it,” Akers said. “The script is brilliant. It takes you on an incredible literary journey.”

The story is about Christopher, a 15-year-old on the autism spectrum turned detective. He is out to find the person who killed his neighbor’s dog. In addition to its compelling story, the play has become very popular because of its creative staging, using technical elements to reflect Christopher’s thoughts and actions and demonstrate how those living on the spectrum experience life.

“We don’t talk about autism,” Akers said. “Autism is what Christopher lives with and we have dialogue about how his brain works.”

“As Christopher, Drew takes us on a journey both physically and emotionally,” Akers said. “You don’t come across an artist like Drew every day. We’re so lucky to have him.”
The cast also includes Gloria Ware, Everette Street, Cecilia Cristol, Amy Hancock, Joseph Stearman, Kerry Burke-McCloud, Neal Thorburn, Lauren Hancock and Peggy McGuinness, with stage management from Ramona Ramdeen.

“The cast is amazing,” Akers said. “We have the right talent to bring it to life and the studio theater is the right space for it.”

April is World Autism Awareness Month, and Players by the Sea is hoping to raise awareness and celebrate the autism community through its outreach efforts.

“For audiences who see the show, I truly want them to realize that Christopher is just like you or me,” Akers said. “This is a powerful story about Christopher’s mind and the great lengths he will go to discover.”

The Curious Incident of the Dog in the Night opens April 20 and runs through May 5. Curtain is 8 p.m. Thursday, Friday and Saturday. There will be a 2 p.m. matinee performance on Sunday, April 29.

There is an advisory warning for The Curious Incident of the Dog in the Night. Players recommends parents of children under age 15 interested in seeing the production call the theatre to inquire about the advisory warning.