Next week,  Engine 15 Brewing Co. officially releases bottles of its annual “Imperial Chupacabra” Russian Imperial Stout at its seven-year anniversary party.  Brewery fans won’t have to wait until July 1 to taste it, though, as co-owners Luch Scremin and Sean Bielman present the 2017 version at a special pre-anniversary Vertical Tasting featuring five years of the house anniversary brew on Thursday, June 22, at 6:30pm. 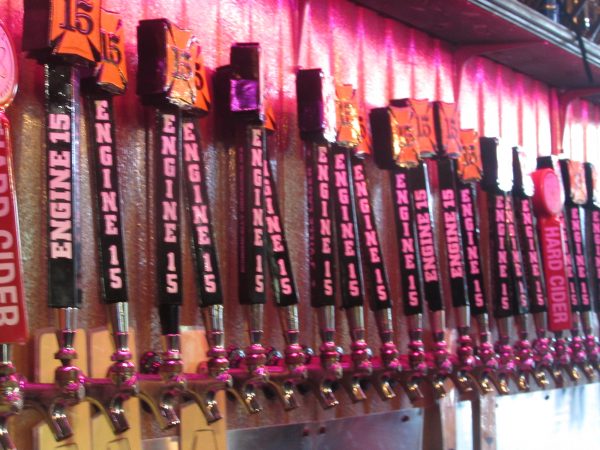 Engine 15’s celebratory beer is a Russian Imperial Stout aged in bourbon barrels. Generally, this style of beer is known for its intense roasty quality, with notes of chocolate and coffee and an overall bittersweet character, with a possible burnt effect. Engine 15 ages its beer in bourbon barrels, with the finished product reaching around 9% ABV. For this year’s anniversary, in addition to the bourbon-barrel aged house stout, the brewery will introduce two variants: one aged in rye whiskey barrels and one aged in rum barrels.

Thursday’s reserved-seating Vertical Tasting features tastings of Chupacabra from 2013, 2014, 2015 and 2016, along with this year’s 2017 version. The event also includes light appetizers and a reception beer. Not only will guests taste each of the previous annual beers, they will be treated to what’s certain to be humorous and informative discussions and insights about those beers, led by Luch and Sean.

Luch describes Engine 15’s Chupacabra as having the “rich, deep and complex” tastes that identify the Russian Imperial Stout style, but with added nuances resulting from the brewers’ creativity.  “What stands out about Chupacabra is the subtleness of the flavors that the barrel delivers. We work hard to make sure the underlying beer takes the front seat in the flavor, and that the barrel qualities like booziness, the tannins, all the flavors from the wood– while definitely there — play a supporting role and enhance the overall beer to elevate it, rather than take over,” he explains.

What can the craft beer aficionados expect from this year’s anniversary beer? “We changed things up and did three variants of aging,” says Luch. “We used Bourbon barrels, Rye Whiskey barrels and Rum barrels. We also used barrels from different distilleries than … before, so the flavor profiles this year are totally different from years past. I think people will really enjoy tasting the different years at the [Tasting] event.”

For anyone who knows Luch and Sean, it might be difficult to tell who is having a better time at Thursday’s special tasting — the brewers or the guests. “The event is really fun for us,” adds Luch. “We, as brewers, get to directly present and interact with our beer consumers and fans, we get direct feedback, and see if what we intended is what we created.”

As of this writing, only several open seats remain for the Vertical Tasting on Thursday, June 22. To reserve a seat, contact David Morenus, General Manager, by email at [email protected]. Tickets are $40 per person. The evening’s events begin with a reception at the Jax Beach brewpub at 6:30pm.

On Saturday, July 1, Engine 15 hosts its Seventh Anniversary Party, known as the “Seven Year Itch,” and Chupacabra bottle release, beginning at 11am.  Expect a crowd to gather well ahead of time. The first 50 people will be able to purchase up to four bottles and will receive a commemorative glass. Of those, the first 25 may also purchase a vintage 2016 bottle.  The next 50 may purchase 2 bottles. If last year is any indication, these will sell quickly: last year’s bottles sold out in under two hours. The party will also feature 35 Engine 15 beers on tap, with timed tappings of 15 guest beers during the course of the day.

Take a look at the 2016 Anniversary festivities and background about the brewery here, and get ready for the 2017 version!

(republished from brewnymph.com; all photos by Linda Johnson)