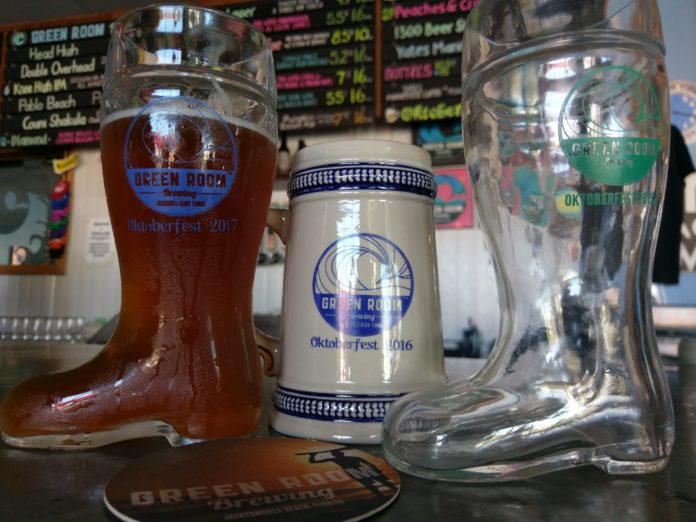 Oktoberfest officially began on Saturday, September 22, when the Mayor in Munich, Germany tapped the first keg. The two-week celebration of malty beers, dirndls and lederhosen continues through the weekend, with more events planned into next week.  Here are highlights of what’s happening around the Jax area craft beer scene on Saturday, October 6:

Bogtoberfest continues through the weekend at Bog Brewing, St. Augustine: Purchase your “Bogtoberfest” stein for a free fill of beer, and bring it back for discounts. After that, be on the lookout for “unofficial” mug-club type events. The brewery tapped an Oktoberfest Marzen that’ll make you sing for more!

Two weeks of Oktoberfest enters its second weekend at all European Street Cafe locations. Wear your German attire on Saturday, and get a wooden nickel worth $5 off your check. Stein hoisting competitions take place Saturday at the San Marco location at 3pm; and at the University location at 5pm.

The tapping of the Oktoberfest beer happens at Green Room Brewing, Jax Beach, Saturday. Wear Oktoberfest gear for 20% off drafts all day. Also on tap will be the Jax-O-Lantern pumpkin brown ale, and several one-off treatments.

In addition to Oktoberfest, more local events include:

Pumpkin Festival and Fall Market at Wicked Barley Brewing, with fall beer releases, pumpkin beers, music in the beer garden, kids’ crafts with Fun 4 First Coast Kids, starting at 11am. The brewery also holds a new can release: Nightmare on Evergreen Terrace, a Belgian Pumpkin Quad, made with pumpkin puree and spices.

The above events and more are listed on the local calendar on http://www.brewnymph.com. Be sure to take a look at the calendar for more events next week!