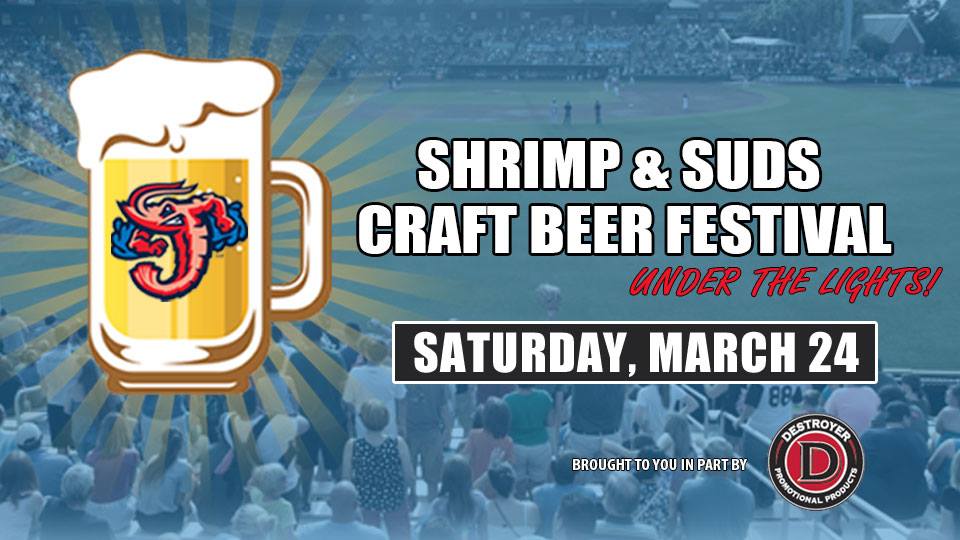 Leading off the 2018 season for the Jacksonville Jumbo Shrimp is the second “Shrimp & Suds” Craft Beer Festival, at the Baseball Grounds of Jacksonville, on Saturday, March 24, from 6-9pm. 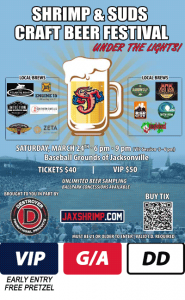 Before the Jumbo Shrimp throw the first pitch and swing for the fences at the home opener on Wednesday, April 11, adult fans can enjoy the ballpark atmosphere and unlimited samples of craft beer from a variety of breweries, including many local Jacksonville area breweries, at the Shrimp & Suds fest. Last year, the Jumbo Shrimp introduced the new team logo and ballpark food menu items with the first craft beer fest on the decks of the stadium, and the popular fest returns as an evening event this time around.

Two levels of ticket options are available: a VIP ticket (one-hour early entry to the fest at 5pm, $50), and a general admission ticket ($40). Tickets can be purchased online through the team website. Concessions areas will serve food from the ballpark menu. Fans will also be able to shop for official Jumbo Shrimp clothing, hats and accessories in the official souvenir store and purchase game tickets.

The Jumbo Shrimp, the AA-Affiliate of the Major League Baseball Miami Marlins, open the 2018 season on April 5, in Jackson, Tennessee, against the Jackson Generals. The team’s home opener takes place on April 11, against the Mobile BayBears, at 7:05pm.