Izzy Tahil started Blue Pacific Grill, and Taco Bar as a tent vendor operating at the Riverside Arts Market then entered into the world of food trucks. Now he is taking another giant step by moving into the brick and mortar arena at Mandarin’s Merchant’s Walk shopping center. I recently had an opportunity to sit down with Izzy to learn about his journey.

Tell us a little bit about yourself?

I was born in Singapore, and lived there for many years, then went on to college in the Philippines.  I moved to New York City and lived there for many years.  I had white collar jobs;  in banking and some computer work as a network administrator.   I lived in Hawaii for five years and eventually moved back to New York for a while then on to Jacksonville.

What brought you to Jacksonville?

My wife, I met her on a dive trip in  Roatan, Honduras, she moved up to New York for a few years, then after four years of her living there we moved down to Jacksonville, I just could not stand the cold anymore.

How did you get started in the food business?

While I was working in banking in New York, I was also working in hotels and restaurants; mostly in the management of the restaurant, that’s how I got started with food.

Why did you start at Riverside Arts Market?

I started at Riverside Arts market because I wanted to test the waters. I had a vision of owning a restaurant here. The market was only one day a week, and at that time I was working at Chase Bank, so I started out as a tent vendor selling Blue Pacific Tacos on the weekends I still carry a few of those tacos today.  After a year and a half of doing that I realized I had many return customers, so I said to myself it’s time to try the food truck. At that point, food trucks were just getting started in Jacksonville, so I started the truck with the Blue Pacific Brand.

What brought about the branding of Blue Pacific Taco?

Just by being in the market I saw people wanted something portable, that they could hold in their hand, so tacos were the perfect solution.  Even back then I knew I wanted to bring different flavors, to people who may not have had food from India, or Japan, so that what I did. I branched out from regular tacos and started doing tacos from around the world; a teriyaki steak taco or a chicken tandoori taco, using a prata in place of the taco shell.

How do you develop your recipes for the tacos?

I do research methods, but even then, if I am making an Asian dish, I would not use a recipe from someone not native to that country.  While growing up and living in Singapore, I found food there is very important. People, they talk about food and eat food, they eat five times a day.  Plus it’s a giant melting pot of cultures. I always let my mother taste my dishes first. She is an excellent cook and is a huge influence in the food I cook. For me to make something, it must be something I have already tasted. I would not make something I have never tried before.

What sparked your decision to transition into the food truck?

The Riverside Arts Market provided me with some income from Saturdays.  After doing that for a while, and having repeat customers, plus everyone saying I should go for a food truck I decided to give it a try. My contract with Chase was coming to an end, and I was looking for something to do. My friend had a food truck, and I said let’s do it. I tell everyone I love the food truck life; I love it!

Are you retiring the truck?

No, the truck is still running, and that is the plan for right now. I did take a step back to get the store up and running, but now we are back on the road. I owe this store to the food truck, how can I abandon it.

Tell us about the new location

I knew I wanted to be in the Mandarin area, and have been looking for over two years. When I first looked at this spot, I just did not see it.  Inside was dark, it looked like a dungeon. When my wife came to look, she saw the potential and we totally remodeled everything. See how bright it is, and we have the great patio space.

What can the customers expect on their first visit?

I want to have someone walk in here, feel comfortable, have some good food and just hang out.  I want to be known as having a simple menu, but good food at the same time.

Who would be your ideal customer?

Anyone who would want to try foods they have never had before, be adventurous, just try it. 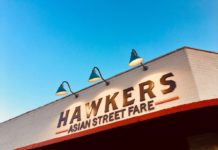 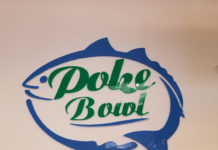 From Hawaii to Riverside, build your own Poke Bowl or Sushi Burrito 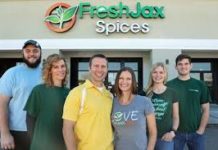 FreshJax is on the top of my gifts to give list this year. 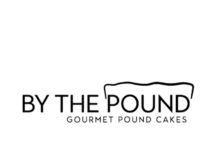 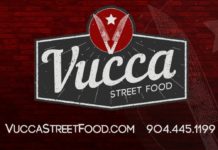 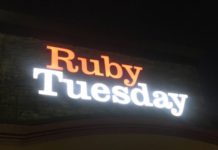 Cool weather calls for comfort food, and Ruby Tuesday has the goods