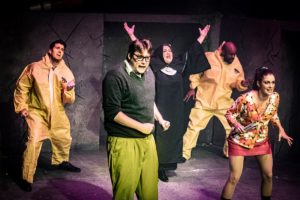 The Toxic Avenger is in production at Players by the Sea through Nov. 10. Based on the 1984 action film, the rock musical comedy offers an entertaining theater experience and is a very enjoyable show.

Presented on the theater’s studio stage, the story revolves around an unlikely hero, Melvin Ferd, the Third. The town of Tromaville, New Jersey, has become a dumping ground for corporations in need of toxic waste disposal, and Melvin decides he will lead the efforts to stop the madness. But when Tromaville’s Mayor hears of his plans, Melvin is thrown into a vat of toxic waste. He reemerges as a mutant superhero who’s out to save New Jersey, end global warming and woo the blind librarian.

The show is under the capable direction of Daniel Dungan, who is well known in the local theater community for his creative lighting design. In addition to directing an incredibly talented cast, Dungan designed the set and lighting for this monster of a musical comedy. Dungan’s two-story set allows the action to unfold at a ferocious pace and the lighting complements the 1980s classic rock score presented by musical director Anthony Felton.

The cast is a tight ensemble of five dynamic actors and singers with powerful voices and impeccable comic timing. While there are only five actors, the character and costume changes make it look like there are dozens in the show. The speed and the way they work off of each other is impressive. 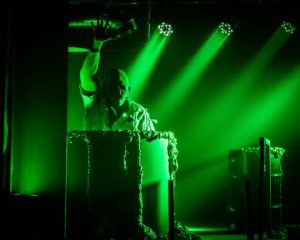 Cole Marshall plays Melvin and Toxie with immense heart, and Alexandra Blackwell stands out as Sarah, revealing a beautiful voice in her hilarious portrayal as the blind librarian. Ilana Gould as the Mayor and Toxie’s mother is marvelous in the competing dual roles that allow her to shine. Many memorable moments belong to Clayton Riddley and Chris Berry, who skillfully play off of each other in numerous comical character roles.

The Toxic Avenger is in production through Nov. 10. Performances are offered Oct. 31, Nov. 1, 2, 3, 7, 8, 9 and 10. Tickets are $28, $25 seniors, students and military. Thursday nights are student nights with $14 tickets at the door with a valid student ID. Players does not take online or over-the-phone reservations for Thursday student tickets. These are only available at the door.

Tickets for the Oct. 31 Halloween night show are specially priced at $22 each. The code to use at checkout is JERSEY. Order tickets online at playersbythesea.org. This offer is valid through noon on Oct. 31, 2019.

Please note: The Toxic Avenger contains adult content and is for mature audiences only. For tickets, visit http://www.playersbythesea.org/toxic-avenger or call 904.249.0289.

Players by the Sea is located at 106 6th Street North in Jacksonville Beach.