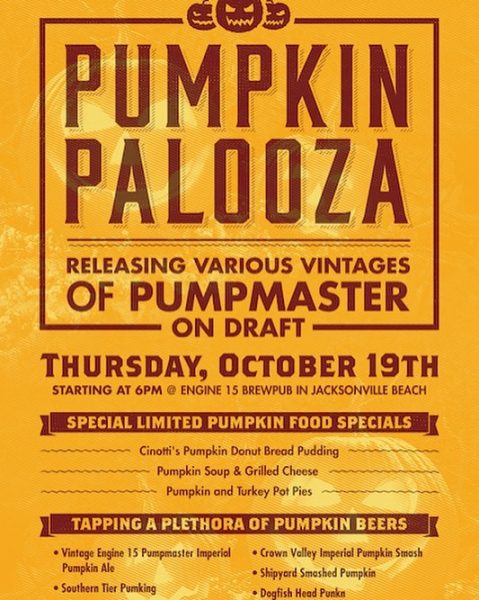 It’s that time of year for all things PUMPKIN! The seasonal pumpkin beers are here, and you can get your pumpkin on at the annual Pumpkinpalooza at Engine 15 Brewing in Jacksonville Beach on Thursday, October 19, starting at 6pm. The celebration of the orange gourd features Engine 15’s Pumpmaster Imperial Pumpkin Ale, along with tappings of other favorites, including Southern Tier Pumking and Cold Press Pumking, Anderson Valley Fall Hornin and Pinchy Jeek Bourbon Barrel Aged Pumpkin Ale, Crown Valley Imperial Pumpkin Smash, Shipyard Smashed Pumpkin, Dogfish Head Punkin Ale, and Alltech Bourbon Barrel Pumpkin Ale.

So, hey Punkin’, head over to Engine 15 for some seasonal fun.

Covering Florida’s beer scene, and news and events around the greater Jacksonville area

“Jacksonville Buzz” with James P Stevens from the Law Offices of...